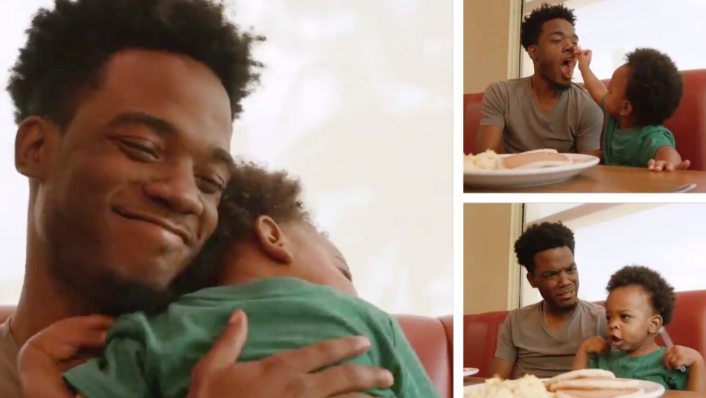 Viral video of Dad “talking” with his infant son turns into a Denny’s endorsement deal for the duo!

Comedian DJ Pryor blew up the internet with the hilarious video of him and his pre-verbal son having an “in-depth” conversation about the Fox television series Empire.

With over 60 million views, Denny’s restaurant was smart and quick – and snatched DJ and his son Kingston up for a commercial that ran over Father’s Day weekend.

Denny’s reached out to DJ (and his agent) within 24 hours of the video catching fire and within days, the deal was cut and DJ and Kingston were on a plane to shoot the commercial.

This is a great example of the ever-changing brand marketing landscape.

The days of story boards and layers of meetings stretched over months to create and finalize commercials has been pushed aside.

Instead, brand managers realize that marketing opportunities happen with lightening speed and in order to capitalize on them, advertisers need to move fast. To date, the Denny’s spot has 1 million views on Twitter and 10 million on Facebook.  Pretty impressive.

The original video of DJ and Kingston “talking” epitomized a loving father and son relationship and Denny’s was very astute to showcase them in a Father’s Day promotion.

I’m thinking Kingston should be looking for his own agent right about now.

All stories by: Darcy L Bouzeos
Jason Momoa didn’t shave off his beard just to encourage recycling – he also did it to endorse a new product!
Allstate’s “Mayhem” has met his match in Tina Fey.