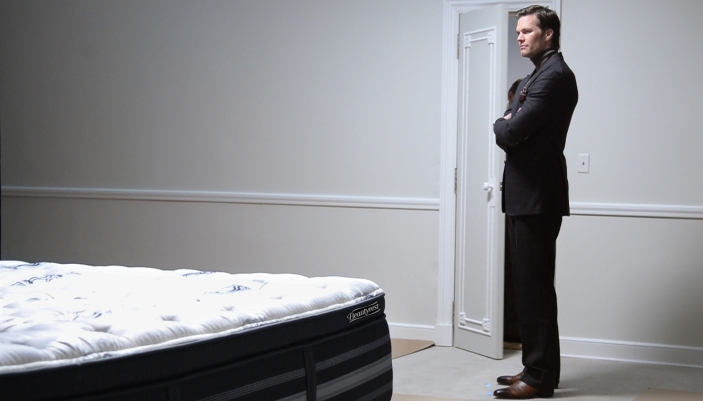 Tom Brady is one of the greatest quarterbacks in NFL history (and he certainly isn’t hurting for a paycheck), so I’m perplexed by his selection of brands to endorse as well as the creative behind them.

First, he aligned with Simmons Bedding Company which in and of itself, is an appropriate brand alignment, but then he agrees to participate in one of the more visually disturbing commercials I’ve seen.

In it, Brady is seen taking a private elevator to a very secluded Penthouse floor, into a room with nothing in it but a bare mattress. Once he sees the empty room with the bare Simmons mattress, he declares that “he needs nothing else”.
Well, I’ve seen enough Criminal Minds and CSI episodes to know that nothing good usually comes out of a bare room with a mattress in the middle.

Why did Team Brady think this was a great marketing concept?

The desired goal was likely to portray the handsome Brady, in his expensive clothes, entering a posh hotel – and only caring about a good night’s rest.  But I think the optic missed the mark and was simply creepy.

Although Brady is nationally known, his core demographic audience is still the football fan.  And I assume most of his fans (like me) are not in the market for an uber-luxury car line like Aston Martin.

I understand Brady and his agents wanting to check off the box of “automotive sponsorship deals”, but just about any other brand (Ford, GM, Chevy) seems like a more appropriate fit for him.  Those brands tend to appeal more to the audience demographics that root for Brady every Sunday.

Maybe I’m missing something with both of these campaigns – but they just seem bizarre.

All stories by: Darcy L Bouzeos
Why Colgate will have you thinking about Michael Phelps while you brush your teeth!
Madison Avenue is finally noticing Chicago Cubs players.